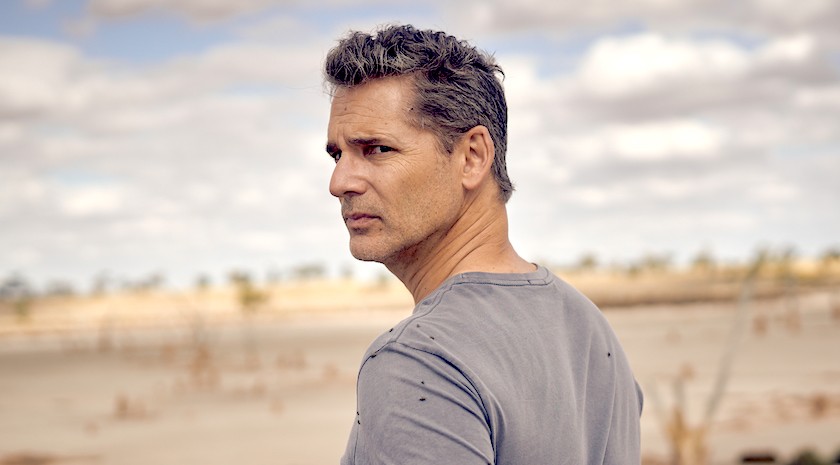 There’s something very confronting about just how dry parts of Victoria are as seen graphically in the movie adaptation of Jane Harpers novel, “The Dry”.

Once flowing rivers are now dry barren creek beds. Lush farming paddocks are reduced to dust bowls where the only thing that grows now is whirly winds. It’s like a moon scape, but it’s real and at the heart of this new Aussie movie starring Eric Bana. The former stand up comedian delivers a full frontal dramatic performance along with Genevieve O’Reilly, Bruce Spence, Matt Nable, Miranda Tapsell, Jon Polson plus all the young actors who support them admirably in the flashbacks.

Only one thing troubles me about this crime, drama, murder mystery is why no one did their math.
The filming location is Horsham and its set 20 years since the unsolved death of a local 17 year old girl.
However all its stars playing older versions of themselves are in their 40’s or 50’s and none look 37 years young.
Otherwise this is a world class movie about a now Australian Federal Police officer returning to his drought-stricken hometown to say goodbye to his lifelong mate at a funeral of him, his wife and son.
Is it a murder-suicide brought on by the years long Dry spell or something far more sinister?
You’ll know the answer after nearly two hours of watching this mystery unravel on the Big Screen…no stone is left unturned.
Thank goodness because I despise open endings with lots of conjecture.
“The Dry” has shades of Picnic at Hanging Rock and will keep you guessing.
You’ll feel all the small country town mood swings for and against this cop from the big smoke played expertly by Bana.

I feel another award or two coming on for him and the films Director, Robert Connolly.
4/5*