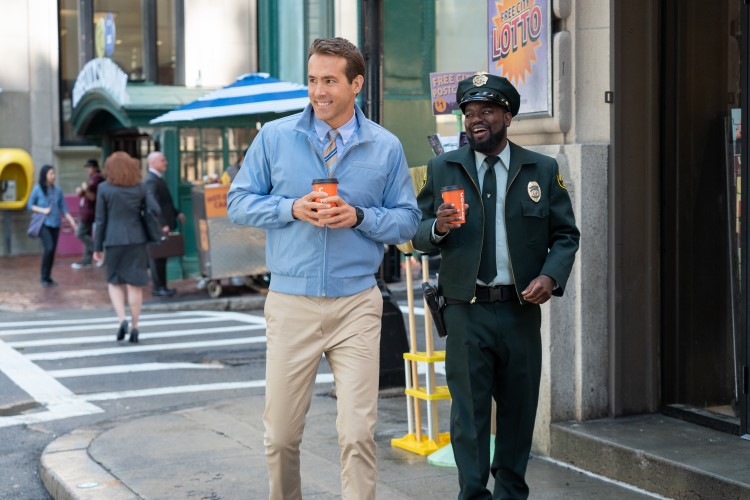 I’ve only been waiting over a year for this movie to be released, but the wait was definitely worth it.
If it feels like “Ready Player One” it’s because the same writer, Zak Penn, worked on both films and it’s based on a story by Matt Lieberman. It’s also a crossover of “Groundhog Day” and “The Truman Show” in the digital age. Nothing is original after over a century of cinema. Even “Spy Kids 3” gets a nod with both movies featuring a character called Guy…or in the latest movies case “Blue Shirt Guy” once he breaks free from the everyday.

Unpacking the story…a bank teller discovers that he’s actually an NPC inside a brutal, open world video game in a place called Free City. The city is actually filmed in Pittsburgh, but mainly Boston and draws heavily on games like Fortnite and “Grand Theft Auto” games in which Liberty City was inspired by New York City. Watch out for famous YouTube gamers and they are not the only ones making cameos.

“Free Guy” was also the final cameo for Alex Trebek in a movie. The “Jeopardy” game show host passing away last year without seeing the final cut.
Watch out for a character called Dude’s catchphrase and the Marvel and Disney connections. “Free Guy” also has plenty of blatant product placements, including Ryan’s own “Aviation American Gin”.

By the way an NPC for non gamers is short for Non Player Character and is computer code rather than being controlled by a human.
But what if an NPC became Artificially Intelligent or AI? Now we’ve got a plot. And what if his world was about to be destroyed?

It’s not only an action, comedy, sci-fi movie its also a love story and a story of hope.

“Free Guy” is in cinemas now!

And remember don’t just have a good day…have a great day!