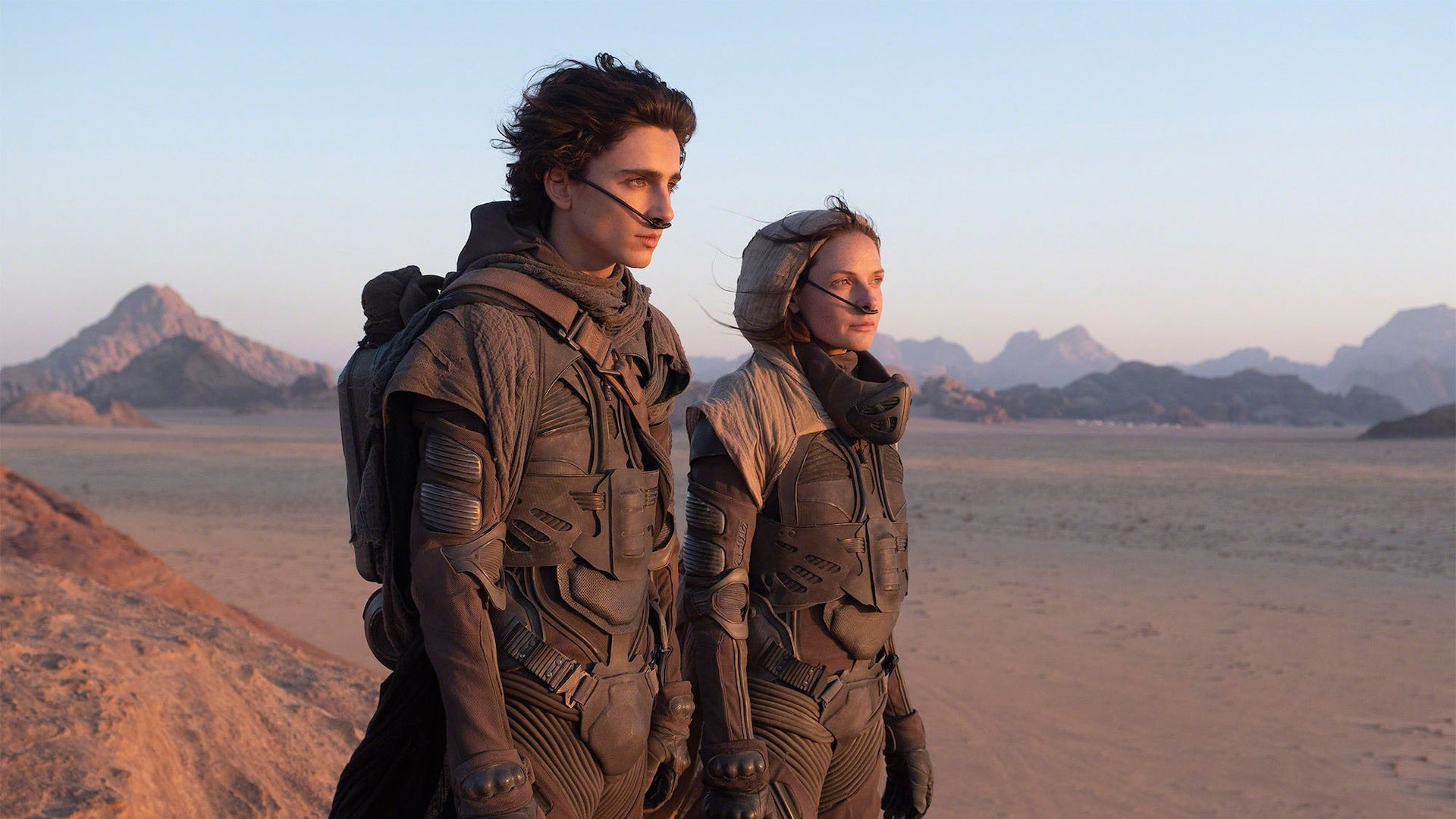 Oh no the powers that be in Hollywood green lit a third instalment released in 2021.
In this future world the most precious substance in the universe is The Spice (that according to its label extends life).

And of course The Spice exists on only one planet in the entire universe, a god forsaken planet also known as “Dune”.

Mainly because it’s a sandy, desert like planet covered in you guessed it dunes.
Under these dunes live The Worms, a massive worm like creature (oddly enough) with a sweet tooth for humans and anything else sitting on these dunes, including The Spice mining vehicles and no similarity whatsoever to the subterranean creatures in Star Wars.

He who controls The Spice controls the universe, so naturally a plot is afoot to divide and conquer “the Houses” of royalty led by the conniving Stellan Skarsgard (looking like a floating Jaba the Hutt before photo for Jenny Craig) as “Baron Vladimir Harkonnen”.
This guy would be called Obese and possibly Type 2 Diabetic even by todays standards.

Watching “Dune” you’ll enter a world beyond your experience, beyond your imagination.
I know it sounds like your dropping in on Willy Wonka and his Factory , but this is serious SciFi so please don’t laugh out loud at some of the scenes involving flying craft that look like giant Dragon Fly’s complete with flapping wings.

Original director, David Lynch’s vision about a Duke’s son, “Paul Atreides” moodily played by Timothée Chalamet this time around, leading desert warriors against the galactic emperor and his fathers evil nemesis to free their desert world from the emperor’s rule has been followed like a GPS guide by Director, Denis Villeneuve. It’s obvious the French Canadians all-time favourite film is Stanley Kubrick’s “2001: A Space Odyssey” by the look and pace of this film.

In the tradition of Denis’ other films “Dune” features graphic and realistic depictions of violence.
The Sound Engineer does a lot of the heavy lifting with this movies epic soundtrack and sound effects.
Watch out for Charlotte Rampling as “Reverend Mother Mohiam”.
Even under a veil of secrecy her ageing beauty shines through.

You could play a drinking game every time the words “The Fremen” are uttered, referring to a vicious tribe of people who live under the dunes and led by Javier Bardem as “Stilgar”.
Rebecca Ferguson is the heroes mum “Lady Jessica Atriedes” although referred to as a concubine.
And Oscar Isaac is “Duke Leto Atreides”.

Let’s face it even in the future the Atreides get the ladies.

Other strong male characters are played by Josh Brolin, Jason Momoa (who’s beard magically disappears and he looks so much younger) and Dave Bautista.

Early in the movie the Lore of this period is explained with a voiceover and foreshadows a little thing we like to call “The Sand Walk”, but it’s not going to catch on with quite the same intensity as Michael Jacksons’ “Moon Walk” did…again try not to laugh out loud in the cinema.

Take a packed lunch and plenty of fluid because this is a 2 hour 35 minute long adaptation of the science fiction novel and only half of the bigger picture.

For many “Dune Part 1” will be just a delicious appetiser for the sequel.

However, you’ll have to be patient and wait till 2023 for Part Two.
Be still my beating heart I don’t know if I can hold out that long.

Or maybe I’ll check out William Hurt in action from the TV series.
That should satisfy my lust for all things “Fremen”…for now at least.